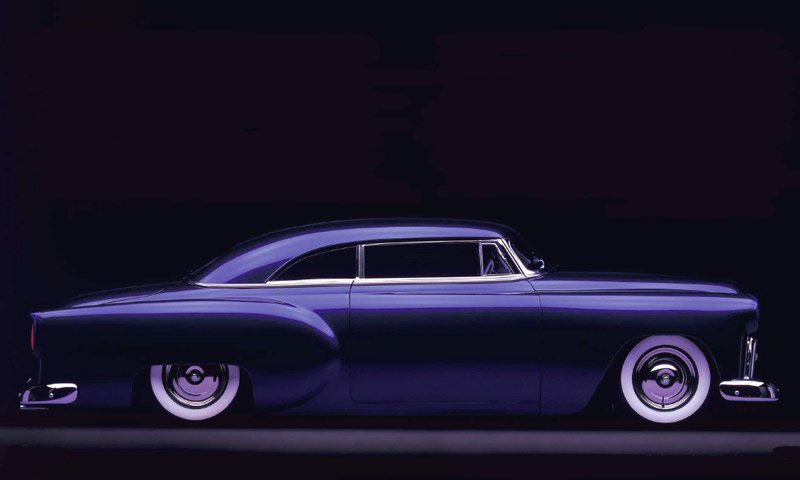 From Hot Rod Royalty comes classic customizing. Cole Foster, owner of Salinas Boys Customs, has been constructing rolling works of metal art since 1989. January 2013, Cole had the prestigious honor of being inducted into the National Hot Rod Hall of Fame. Similar to his father, Pat Foster who happens to be in the National Drag Race Hall of Fame for his extensive and successful race car driving career. At the 2001 Grand National Roadster show Cole left with the Chip Foose Design of Excellence Sweepstakes award from his 1956 Ford F100 Truck.

Cole creates cars that are so clean they don’t have lines – the simply flow, as evident from the thousands of magazine features written on these customs that roll from the bays of the Salinas Boys shop in the quiet California town. Cole’s first magazine feature was in 1989 and the press has snowballed ever since.

Fosters designs have been much coveted by rock stars who are in the know of hot rods. He has built customs and bikes for guys like Sammy Hagar of Van Halen, front man, Mike Ness of the punk band Social Distortion and a 1936 Ford for Metallica’s Kirk Hammett that has been exhibited in the Ford Museum in Detroit and worldwide such as the Moon Eyes show in Yokohama, Japan.

In 2001 Cole built the blue bike a bobber style motorcycle that promptly set the bike world on its collective ear. The Blue Bike, as it’s referred to, is a tribute to classic styles. The bike was featured on Speed Channel’s “Corbin’s Ride On TV” and on TNN with “Popular Hot Rodding TV” plus no less than 50 magazines worldwide, including Easy Rider, Cycle World, Iron Horse and Freeway. The gas tank that he manfactured from that bike has become one of the most sought after motorcycle parts in the world. The cars are the stars but Cole feels very fortunate that his talent has taken him around the world and made life long friends with the collectors that have bought his cool rides and the fans he has met. Cole is humbled that he often is the featured or headlining guest at numerous shows worldwide.

Cole’s designs are timeless, stylistic and subtle yet making a screaming statement collectively with the final product. Searching for the original designers clean lines of the car before corporate restrictions were placed. Attention to detail, maintenance of pure lines and skillful craftsmanship are the qualities respected by those who have seen Cole’s work. Passionate and obsessive in the pursuit of the perfect custom is what defines Cole Foster the artist.